What is the Holy League 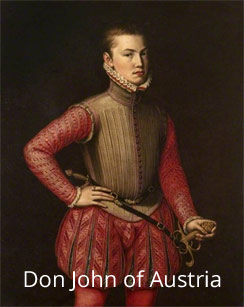 Pope St. Pius V formed the original Holy League in response to the dire situation in which Christian Europe found itself in 1571. Small bands of Catholic men and remnant armies from various nations came together under the spiritual leadership of the saintly pontiff and the military leadership of Don John of Austria.

By prayer and fasting, they implored the help of God’s grace, through the intercession of the Mother of God, and, by the grace of Almighty God, on October 7, 1571, at the Battle of Lepanto, the Christian fleet won a crushing victory over the OttomanTurks, saving Christendom and western civilization.

At this particular moment in time, the Church finds itself in a similar situation to that of the Church in the late Sixteenth Century. However, instead of a physical enemy on the horizon, the Church and the family (the domestic Church) are threatened daily by relativism, secularism, impurity, and confusion regarding Church teaching.

The battle today “is not against human forces but against the principalities and powers, the rulers of this world of darkness, the evil spirits in the heavens” (Ephesians 6: 10-12).

To combat the forces of evil in today’s society, the Holy League strives to call men back to the state of grace and to transforming the culture through prayer.”

The Holy League, in fidelity to its mission as a Roman Catholic solidarity movement:

The Vision of the Holy League is to develop a network of parish based regular monthly Holy Hours with confession and fraternity for men.

The Holy League, in a Spirit of Marian Chivalry, under the patronage of Our Lady of Guadalupe and Saint Joseph, seeks to provide opportunities for the faithful to unite in prayer, especially monthly Eucharistic Holy Hours, for purification from sin and predisposition to Supernatural Grace for the fuller exercise of the threefold offices of Priest, Prophet, and King received at Baptism. The particular prayer of the Holy League is the monthly Eucharistic Holy Hour.